Some Heterodox Free Thought History Learned From an Old Book’s Dust Jacket: Before There Was Paul Kurtz and His “Prometheus Books,” There Was Charles Watts and His “Watts and Company”

Rather fascinated by a free thought classic, Christian Hell from the First to the Twentieth Century, published in 1913 by Watts & Company, and written by Hypatia Bradlaugh Bonner, I went in search of other writings by the same author and found a 1936 edition of a book of her father’s writings that she’d edited, and written the preface for, and that still posessed its original dust jacket: 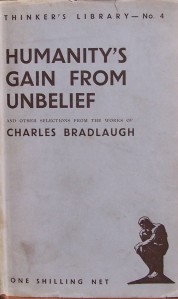 The preserved Watts & Company dust jacket proved itself to be rather interesting—a kind of entry point into a heterodox free thought world of more than 70 years ago. It had, for example, advertisements on its back cover for two rather curious titles:

And the dust jacket also bore advertisements on its inner flaps. This one looked especially fascinating:

In short, the dust jacket made me curious about the publisher. I consulted Tom Flynn’s excellent resource, The New Encyclopedia of Unbelief (Prometheus 2007), to see if there was anything on Watts & Company, and it turns out that there is—and that Watts & Company was, as it were, the Prometheus Books of the early 20th century. Started by Charles Watts, the publisher’s ambition was to sell heterodox free thought books at workingmen’s prices (hence the one shilling price on the dust jacket’s front cover). Watts & Company also initiated the Thinker’s Library series, which published everything from Darwin and Huxley to contemporary free thought writers. But the Great Depression and World War II wore down the economic viability of the press, and increasing competition from Penguin, which started its own line of classics at accessible prices, ultimately drove the publisher, alas, into extinction.