Did the Actions of Sarah Palin’s Exorcist, Thomas Muthee, Lead to the Murder of Mama Jane, the “Witch” of Kiambu?

Posted on September 22, 2008 by Santi Tafarella

Specifically, Wagner recounts the start of Muthee’s career and his encounter with the “witch” known as “Mama Jane.”

Who is Peter Wagner? Here’s a quote from his Wikipedia page:

In 1982 Wagner teamed up with John Wimber, a founder of the Vineyard Movement, to create a new course at Fuller called “Signs, Wonders and Church Growth”. Since that point, Wagner has been formally associated with Charismatic teaching and theology. Wagner describes himself as a Charismatic Evangelical. During the 1990s he also taught a Sunday School class with a strong focus on the charismatic gifts, known as “120 Fellowship”, at Lake Avenue Church in Pasadena, CA.

Below I quote and discuss various passages on Thomas Muthee from Wagner’s book.

It’s important to note that Wagner knows Muthee personally, and works with him on various projects.

This first quote is from page 23 of Praying with Power: 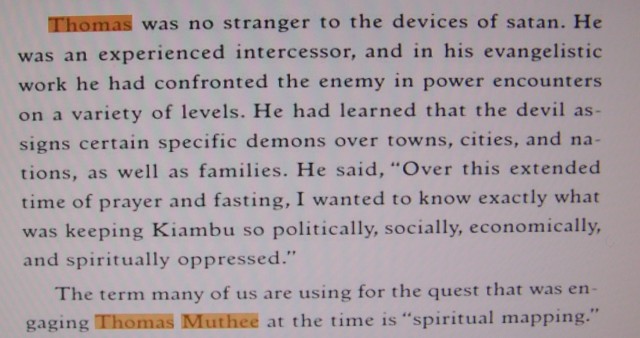 There is, in other words, no church-state separation for Muthee. Economic and political battles are undergirded by spiritual battles against demons.

One can only wonder whether Sarah Palin thinks of economics and politics in similar terms.

Notice also that Wagner positions Thomas Muthee as someone who has unusual spiritual powers. In any other context, we would say that Wagner is attributing to Muthee magical or psychic powers—but in the lingo of charismatics, these are called the “gifts of the Spirit.”

One of Muthee’s gifts, apparently, is the ability to discern things in the spirit realm, for he “had learned that the devil assigns . . . demons over towns, cities, and nations, as well as families.” This is a curious thing to discover, and if true, is an extremely important piece of information to communicate to an American vice-president or president.

Do you suppose that Sarah Palin would give weight to Thomas Muthee’s words for her, whenever they might meet or talk by phone?

The second quote is from p. 24 of Wagner’s book:

Notice that Wagner presumes that witchcraft is something real—and he exercises no skepticism in the recounting of this story.

God is also presumed, without evidence, to be the source for Muthee’s vision.

The next quote from Wagner’s book, from page 26, brings us to a characterization of Kiambu’s local “witch,” Mama Jane: 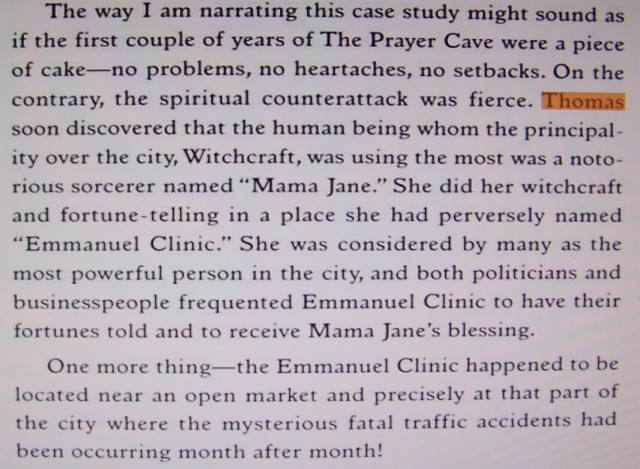 Notice the adjectives used in the passage. Mama Jane is “notorious,” “perverse,” and “powerful.” The car accidents are “mysterious.”

The exact same narrative template could have been used by medieval Europeans to describe Jews in their community and a cluster of, say, drowning deaths in a particular part of town.

In other words, if this kind of talk was directed at Jews, and diabolical happenings were attributed to them, we would recognize immediately the mind of an anti-semite. What we see, instead, is the mind of a mysogenist.

The next passage appears on page 27:

Notice here that Wagner is setting up Mama Jane as being in a contest with Thomas Muthee’s group, and that she is provoking confrontation.

Whether she was engaging in such confrontation is open to question. Another way to interpret her behavior is that she was simply a woman with animist or magical beliefs, and that she was practicing her religious beliefs in proximity to Muthee’s group, which they interpreted as a challenge.

Or it may be that Wagner’s characterization of the situation is accurate, and Mama Jane was provoking a confrontation with Muthee’s group.

But if this is the case, we can only wonder whether or not Mama Jane, as a woman besieged and outnumbered, was simply fighting back in the way that she knew how—by counter gestures of magical thinking.

But even this explanation sounds fishy. A woman facing the paranoia of her community, and the violence it could entail, is unlikely to act out public gestures that would provoke further paranoia.

In short, Mama Jane’s provocations may be akin to a story teller’s rationalization after the fact.

It would be hard to justify harrassing a woman who mostly kept to herself.

In any case, the encounter between Muthee’s group and this unfortunate woman appears to have been one saturated with paranoia, superstition, and magical thinking, perhaps from both sides.

And it got worse:

Yes, you read that right.

And yes, it appears that no explanation but deviltry (“it could be no coincidence”) could be fathomed, by Muthee’s followers, for Mama Jane’s proximity to a dangerous traffic area.

On page 30 of Wagner’s book is this description of Muthee’s demand that Mama Jane leave the community: 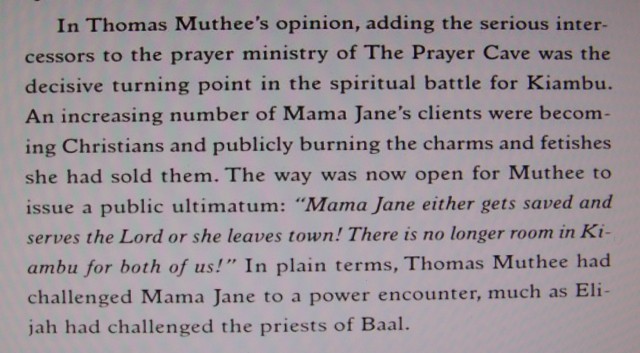 By the way that Wagner describes it, it is hard to tell if these were individual or collective public gestures of iconoclastic burning and destruction.

And one can only wonder what else was deemed worthy of burning that Wagner does not mention.

Whatever exactly went on in Kiambu, Muthee’s cruel and arrogant behavior, and that of his agressive and frightened followers, must have been terrifying for Mama Jane to behold.

And Wagner might have, with the exact same evidence, depicted Muthee as a fanatic and hysteric trampling on the basic human rights of another human being.

But instead, Wagner makes Muthee into a modern day Elijah in the process of vanquishing a Satan-driven follower of Baal.

Wagner’s triumphalism reaches a still more feverish and absurd pitch in this next passage, from pg. 31 of his book:

Mama Jane’s arrest and detention is simply described by Wagner as “questioning.”

But Kenya is not the United States, and the police may well have threatened, intimidated, or even tortured her.

Her quick exit from the town, and her complete disappearance from the narrative, suggests that she may well have been threatened with death.

She may even have been killed, inside or outside the city, perhaps by the police, who then said that she “left” the community.

Why, one wonders, given the high degree of paranoia and superstition that Muthee had generated in the town, should we take for granted that Mama Jane got out of the community alive?

Wouldn’t the rumor of her being a witch have followed her?

Does it really make sense that she just went away and lived somewhere else in peace?

Wouldn’t her life, after her encounter with Thomas Muthee, have been forever precarious?

Wagner’s gleeful statement that Kiambu became a witch’s graveyard may, in literal fact, have been true.

I hope that Mama Jane got out of Kiambu alive.

But I don’t trust the narrator of this story, or Thomas Muthee’s version.

As Judge Judy used to say, “If it doesn’t make sense, it probably didn’t happen that way.”

Wagner’s telling of Thomas Muthee’s rise to power in Kiambu ends on this note:

And they all lived happily ever after—except Mama Jane.

18 Responses to Did the Actions of Sarah Palin’s Exorcist, Thomas Muthee, Lead to the Murder of Mama Jane, the “Witch” of Kiambu?