After a long life of near-total inattention and skeptical dismissal of UFOs, and my recent decision, on the prompting of my UFO enthusiastic retired father, to give the matter a more attentive and sympathetic look, I now find fricken’ UFOs everywhere!

I can’t get away from them now. For example, in our house my wife and I have a framed movie poster of the film Amelie, and now I see the film star, Audrey Tautou, with her demure chin and humongous goggle-eyes, as a kind of sinister alien staring at me whenever I walk down the hall. And when we took our kids to the Long Beach Aquarium recently, I found myself weirded out by the jellyfish. Here’s a picture I snapped this weekend: 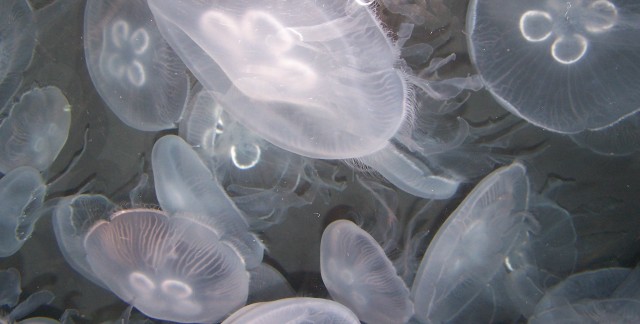 They’re everywhere, aren’t they? I feel like I just bought a new car, and now notice that everybody else has bought the same car too! I never noticed, as it were, until I started noticing.

And two nights ago my family was woken at 3:00 am by an unknown to us GRAY Honda Civic, with two “teenagers” in it thumping music. When I went out to tell them to turn their music down, they just laughed at me, and when I looked at their license plate, they didn’t have one! It wasn’t hard to figure out who they really were, with that spacey Honda symbol on their “car.” And in the morning the spaceship had gone!

Okay, I admit that this alien encounter is not exactly akin to Ezekiel’s wheels (see the first chapter of Ezekiel in the Bible), but the point is: I’m having experiences. Even my two daughters’s little splashing pool in the backyard, when the sunlight reflects from its water onto the ceiling of the patio overhang, looks like the projection of a wavy spectral saucer over my head.

I can see where this is going. The grays have got me. I’m in the same inescapable labyrinth as the astronaut-dude at the end of Kubrick’s 2001. It will end in a revelation of vision, a look into the body of some alien thing, and an expression of the impossibility of closure: “It’s full of stars!”

But actually, I’ve already had that kind of experience. It was on the morning of my first daughter’s birth, her umbilical cut, and she drifting and astronaut-flailing blindly from her mother ship. I looked down at her on the table to which she had been placed, leathery and gray-blue with afterbirth, and saw her oddness, her helplessness, and her flungness into the universe. I promised her that I would help her figure things out, and get through this very, very weird existence. She wasn’t alone, and heaven and earth met in her. She was impossible to fathom. She was full of stars. That’s what it will be like, I think, when we meet the aliens.