With Regard to the Internet, What Would Gandhi Do?

Posted on February 3, 2010 by Santi Tafarella

I found this Gandhi quote several years back while perusing an undated letter of his that I found in volume 49 of his Collected Works. At least that’s what I wrote down. My local branch library in Lancaster, Ca. just happened to be the place where the Los Angeles County Library system housed a giant multivolume collection of Gandhi’s writings. Unfortunately, I wrote out the quote, but I didn’t note who he had written his letter to. Anyway, this is my recollection of how I came into possession of this quote, and now I share it with you. It’s a jewel:

There is no doubt at all that every obstacle which we place between ourselves and the sky harms us physically, mentally and spiritually. If we lived in a natural state, we would live under the sky for all the twenty-four hours of the day. If we cannot do that, we should spend in the open as many hours as we can. We can watch the heavens, i.e., the stars, only at night, and we can do that best lying on our backs. Hence, anybody who wishes to derive the utmost profit from the observation of the stars should sleep in the open directly under the sky.

When I read it again after many years of not remembering it, it pricked me. I’m not sure Gandhi would have had a comfortable relationship with contemporary humanity’s wired existence. But to feel less guilty about living an excessively plugged-in lifestyle, here’s a William Wordsworth sonnet (“Nuns Fret Not”) that kind of counters Gandhi’s “be out-of-doors” ethic:

Nuns fret not at their convent’s narrow room;

And hermits are contented with their cells;

And students with their pensive citadels;

Maids at the wheel, the weaver at his loom,

Sit blithe and happy; bees that soar for bloom,

High as the highest Peak of Furness-fells,*

Will murmur by the hour in foxglove bells:

In truth the prison, unto which we doom

Ourselves, no prison is: and hence for me,

In sundry moods, ’twas pastime to be bound

Within the sonnet’s scanty plot of ground;

Pleased if some souls (for such there needs must be)

Who have felt the weight of too much liberty,

Should find brief solace there, as I have found. 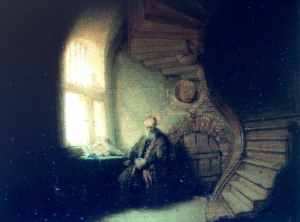 *Mountains in the Lake District.

1 Response to With Regard to the Internet, What Would Gandhi Do?