I can’t quite put my finger on it, but I get a “the truth will out” vibe from the paintings of Robert Campin—a sort of protective concealment-revelation cycle of some sort functioning as a subtext in at least some of his paintings.

Here, for example, is detail from a Robert Campin painting, circa 1425: 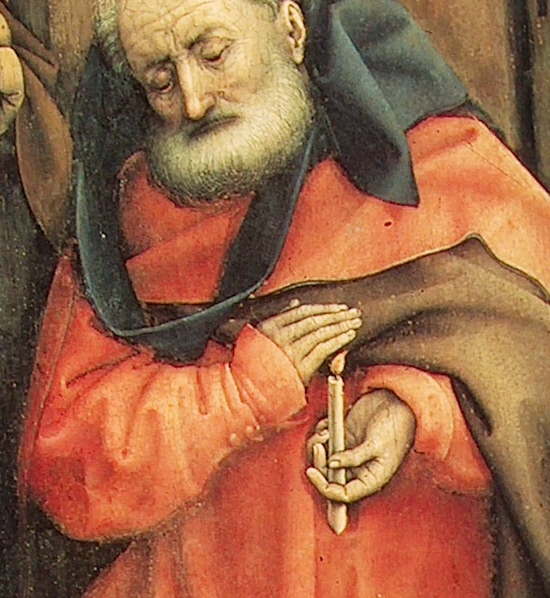 Maybe this “protective covering” thematic—this guarding of the soul’s true light—was a motif working in his life that came out in his paintings. And it may just be a coincidence because I’m looking for evidence to support my intuitive impression, but I notice that, according to Wikipedia, in Tournai in 1429, Robert Campin was embroiled in some form of political intrigue that culminated in a conviction “of withholding evidence.” He was sentenced to go on pilgrimage and, returning to Tournai, was subsequently convicted (in 1432) of adultery.

Here’s something else that Campin painted:

Notice the delicate layers of concealment and exposure. And here’s a woman that Robert Campin portrayed in her privacy, absorbed by the revelations of an open book. Seemingly rejecting the exposing light of the outdoors, she chooses to be inside, sustained by an inner fire:

This is the irony of painting interpretation. Once you pick up a motif, and become attached to the idea of it, it suddenly jumps out at you everywhere, as if you purchased a new car and now notice the same model at every third street light. Perhaps painting interpretation functions as an example of the human proclivity to confirmation bias—noticing things you already believe and ignoring those things that don’t fit your theory. And by my suggesting that Campin has a subliminal pattern of concealment and revelation in his paintings, perhaps you now see it too. But is this just a projection of one person’s evocative object dream world—mine—like a viral meme—onto you? Or is it something real discovered and shared between Robert Campin and me—and now you?

What is the truth here—and will it out?

The source for the last two images above is Wikipedia Commons. As for the first image, the old man holding a candle is Joseph from the nativity scene below. And when you look at the nativity scene as a whole, I find myself also wanting to read it as a revelation-concealment parable: the gentle bull in the manger, for example, is chilled and exposed—like the baby Jesus on the cold and hard ground. And our impulse is to want to surround and guard them—to blanket the naked revelation of both of them in protective coverings. But, alas, the lonely bull, himself unenamored of the baby Jesus—and perhaps even jealous—looks at us ironically as if to say, “Why does no one take notice of me in my animal beauty? Everything is holy! You can see that, can’t you?”

Holy lonely bull of Robert Campin’s painting, this is for you: