Why I love the man

From the transcript of a University of Michigan spring commencement speech that President Barack Obama gave on May 1, 2010:

[W]e need an educated citizenry that values hard evidence and not just assertion. As Senator Daniel Patrick Moynihan famously once said, “Everybody is entitled to his own opinion, but not his own facts.”

Still, if you’re somebody who only reads the editorial page of The New York Times, try glancing at the page of The Wall Street Journal once in a while.  If you’re a fan of Glenn Beck or Rush Limbaugh, try reading a few columns on the Huffington Post website.  It may make your blood boil; your mind may not be changed.  But the practice of listening to opposing views is essential for effective citizenship. It is essential for our democracy.

And so, too, is the practice of engaging in different experiences with different kinds of people.  I look out at this class and I realize for four years at Michigan you have been exposed to diverse thinkers and scholars, professors and students.  Don’t narrow that broad intellectual exposure just because you’re leaving here.  Instead, seek to expand it.  If you grew up in a big city, spend some time with somebody who grew up in a rural town.  If you find yourself only hanging around with people of your own race or ethnicity or religion, include people in your circle who have different backgrounds and life experiences.  You’ll learn what it’s like to walk in somebody else’s shoes, and in the process, you will help to make this democracy work.

Walking in somebody else’s shoes. One of Barack Obama’s great strengths is his negative capability (something that Walt Whitman also possessed). And Obama seems to have gotten it, at least in part, from his lifelong reading of literary fiction. See here for more on Obama’s reading, and reading habits. He is a man who pays more than lip service to the value of critical thinking, the life of the mind, and the empathy of the heart. I continue to be astonished that such a sane, centered, and thoughtful man has found his way, however temporarily, to the top of our otherwise inane political culture. I don’t know how long he’ll manage to stay there, but I’m going to enjoy his presence at the top for as long as I can. 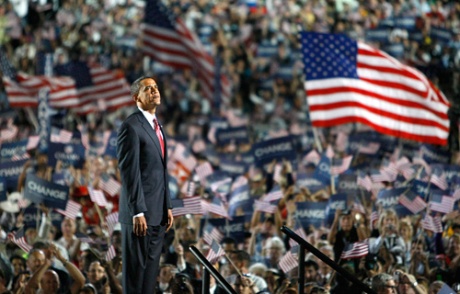 2 Responses to Why I love the man