In praise of Chateauneuf (Voltaire’s godfather and tutor)

Below are some rather impious lines from La Moisade, a 17th century French satirical poem (author unknown). It opens with this sass of Mosaic legislation:

A teaching so irrelevant

Shall not my doubts destroy?

With empty sophism thou shalt not

My reason fool nor try.

Than any priestly platitude.

This poem, says Roger Pearson, a biographer of Voltaire, was something that Voltaire was rumored “to have learnt by heart at the age of three—but which he almost certainly did read and learn some time before he was ten” (17).

And what adult taught him so scurrilous a poem (for surely Voltaire did not find it lying around in the nursery)?

And why did Chateauneuf teach his godson such a poem? Once again, our biographer of Voltaire explains (from pg. 17 of his book, Voltaire Almighty ):

What emerges . . . is that Chateauneuf—and he an abbe—saw it as his grandfatherly role to introduce the boy to religious scepticism at an early age, as though inoculating him against the very doctrines that he himself had had to study.

Inoculation. In other words, Chateauneuf was a Iago  whispering skeptical impieties into a delicate child’s ears. Amidst the blind faith-praising Christian flock, here was a wolf in sheep’s clothing teaching a young boy to think. And if we did not have Chateauneuf—if somebody else had gotten to the boy and shaped him—we might not have had Voltaire.

At the evident risk of considerable oversimplification, the fifteen million words that Voltaire wrote over the ensuing eighty years were an obstinate repetition of those six simple lines.

And we have, at least in part, Chateauneuf to thank for it.

Voltaire was just 14 when Chateauneuf died (in 1708), but Chateauneuf, by his early interventions with him; that is, by his acts of educational mercy  (teaching a child to think clearly about religion before the fundamentalists got to him), proved to be a gift, not just to Voltaire, but to the world.

Might you teach a child some critical thinking today? For Chateauneuf? 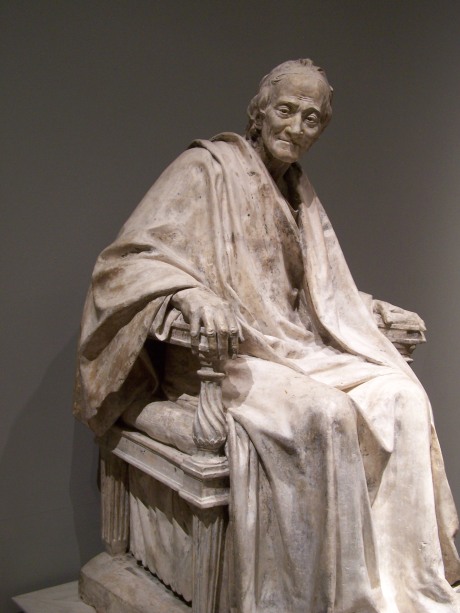