Christopher Hitchens was recently interviewed by Hugh Hewitt, and offered an interesting tidbit on a rhetorical strategy that tends to work for him:

[W]hen I write, as often as I can, I try to write as if I’m talking to people. It doesn’t always work, and one shouldn’t always try it, but I try and write as if I am talking, and trying to engage the reader in conversation. And sometimes, I get letters from people saying they feel they’ve been personally addressed. And I always think of that as a success.

Hitchens’s attempt to write in a direct, casual, and personal manner reminds me of both Thoreau (from Walden:  “We often forget that it is the ‘I’ that is speaking”), and Peitho, the goddess of rhetoric, persuasion, and seduction. In ancient depictions, Peitho tends to accompany Aphrodite, the goddess of love. Why Aphrodite? Because it is by artful and pretty words that your rational defenses—especially against love—are overcome and conquered (as in Gorgias’s “Encomium for Helen“). Below, for example, is an ancient representation of Peitho on a pillar overseeing a scene of persuasion: Helen of Troy is below Peitho’s dangling feet while Aphrodite speaks to her; Paris, at the far right, is also receiving a “talking to”—by winged Eros.

I do not mean to imply that reason and rhetoric never go together. Obviously, they often do. Christopher Hitchens’s essays and books are supreme examples of when they do. But I think that Hitchens’s personal style of writing is akin to conversational seduction, and I don’t think that he would be ashamed to acknowledge (metaphorically) Peitho’s lifelong presence with him. I suppose that if all great poets are attended by the muses, all great writers and persuaders (like Hitchens) are attended by Peitho. In other words, as poets might call on the muses for assistance, the rhetorician, the orator, the writer, the lawyer, the lover, the politician, the advertiser, and the propagandist might call on perhaps the most subtle and dangerous little daemon of all: the accompanying mistress of all mesmerizing arguments, Peitho. 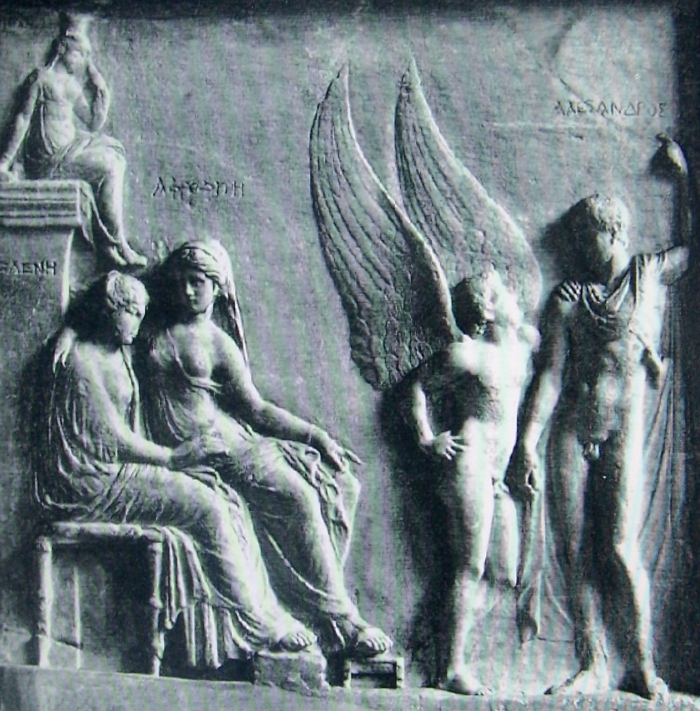