Newt Gingrich and Sarah Palin Have No Jeffersonian Clothes: Ron Paul Favors the Building of the Ground Zero Mosque and Castigates Its Opponents

The so-called ground zero mosque is generating a rift between Jeffersonian libertarian conservatives and those who identify with the Herderite Tea Partiers. The latest evidence of this split can be found in a statement released by the libertarian congressman, Ron Paul, who wrote this:

The debate should have provided the conservative defenders of property rights with a perfect example of how the right to own property also protects the 1st Amendment rights of assembly and religion by supporting the building of the mosque.

Instead, we hear lip service given to the property rights position while demanding that the need to be “sensitive” requires an all-out assault on the building of a mosque, several blocks from “ground zero.”

It is repeatedly said that 64% of the people, after listening to the political demagogues, don’t want the mosque to be built. What would we do if 75% of the people insist that no more Catholic churches be built in New York City? The point being is that majorities can become oppressors of minority rights as well as individual dictators. Statistics of support is irrelevant when it comes to the purpose of government in a free society—protecting liberty.

The outcry over the building of the mosque, near ground zero, implies that Islam alone was responsible for the 9/11 attacks. According to those who are condemning the building of the mosque, the nineteen suicide terrorists on 9/11 spoke for all Muslims. This is like blaming all Christians for the wars of aggression and occupation because some Christians supported the neo-conservatives’ aggressive wars.

The House Speaker is now treading on a slippery slope by demanding a Congressional investigation to find out just who is funding the mosque—a bold rejection of property rights, 1st Amendment rights, and the Rule of Law—in order to look tough against Islam.

This is all about hate and Islamaphobia.

Ron Paul has hit the nail on the head, don’t you think? The Herderite Tea Partiers like Newt Gingrich and Sarah Palin have no Jeffersonian clothes.

And so conservatism is at a crossroads. It’s Oakeshott or Strauss; Jefferson or Herder. Or, to put it visually, it’s this:

Or this (Calvinists iconoclastically trashing a Catholic Church in Geneva, 16th century): 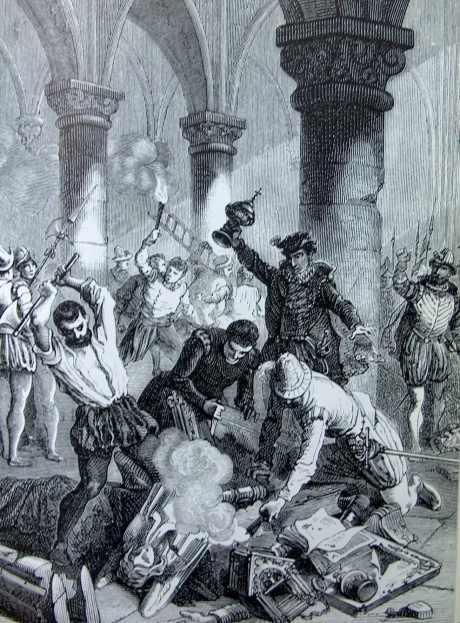 If you call yourself a conservative, what’s your choice?

1 Response to Newt Gingrich and Sarah Palin Have No Jeffersonian Clothes: Ron Paul Favors the Building of the Ground Zero Mosque and Castigates Its Opponents