The Heart of Dante Alighieri

If you’ve never read Dante Alighieri, the following is written as an enticement for you to consider doing so.

Dante was born in Florence in 1265, but he did not die there. In fact, this is one of the important things to keep in mind about Dante: in 1302, in the middle of his life’s journey, he joined up with a political faction that lost in a power struggle, and he became a man in exile from Florence, a wanderer, and he never returned. He died in Ravenna in 1321. And so the opening lines of Dante’s famous poem, The Divine Comedy, would appear to allude to what the initial experience of his exile must have been like for him:

When I had journeyed half of our life’s way,

I found myself within a shadowed forest,

for I had lost the path that does not stray.

Ah, it is hard to speak of what it was,

that savage forest, dense and difficult,

which even in recall renews my fear:

so bitter—death is hardly more severe!

Permanent exile is a kind of death, and the most famous line of Dante’s Divine Comedy  (see below) also conveys this dread of a final separation. But the separation being referred to, of course, is not from an earthly city, but from the heavenly city, the city of God. Dante, in the first third of his Divine Comedy, finds himself on a tour of Hell, L’Inferno. He arrives there accompanied and guided by the Roman poet Vergil, travelling by way of “a steep and savage path”, through a gate upon which is written over it the following words:

ABANDON EVERY HOPE, WHO ENTER HERE.

Truth is central to Dante. In fact, it is those who fake reality—liars, betrayers, etc—who are in the inner circles of Dante’s Hell. But what sustains the impulse to truth? For Dante, it is the idea that truth is beautiful. One cannot live on pragmatism, reductionism, and function alone; one must be captivated toward moral behavior by either words that arrest the heart or by some sort of vision—a beatific vision. Dante, for example, at the age of eight, was first awakened to love, and subsequently submitted his life to it, after a chance sighting of a nine-year-old female named Beatrice. As Dante writes toward the beginning of his La Vita Nuova:

The moment I saw her I say in all truth that the vital spirit, which dwells in the inmost depths of the heart, began to tremble so violently that I felt the vibrations alarmingly in all my pulses, even the weakest of them. As it trembled, it uttered these words: Ecce deus fortior me, qui veniens dominatbitur mihi  [Behold a god more powerful than I who comes to rule over me (i.e. Love)]. . . . From then on indeed Love ruled over my soul, which was thus wedded to him early in life, and he began to acquire such assurance and mastery over me, owing to the power which my imagination gave him, that I was obliged to fulfill all his wishes perfectly.

That’s the moral impulse: slavery to one’s beloved; to fulfill love’s imperatives and wishes without limit, perfectly. And it was at the age of eight that Dante discovered what it means to be, not a calculating utilitarian, but a surrendered devotee under the spell of Love’s mystery. Under Beatrice’s power, Dante was seized and oriented. He knew what to do. Without some sort of sustaining beatific vision—a North Star—love and morality reduce to a shifting calculus, which is no love or morality at all.

So this is “Danteism”: a chance encounter with Love that compels us to come; to orient to a vision of beauty or an outrage at an ugliness. It is to make of that orientation a cosmos, a new idea of order, as in Wallace Stevens’s poem, ”The Idea of Order at Key West.” In Stevens’s poem a woman walks a beach singing, and this, being brought to our attention, changes everything. We are beguiled and compelled to follow:

For she was the maker of the song she sang.

Was merely a place by which she walked to sing.

Whose spirit is this? we said, because we knew

It was the spirit that we sought and knew

That we should ask this often as she sang.

How did Stevens and the others know what to do (and what they would do) in response to this vision? They just knew. Like the apostles with Jesus, this was it—the moment to drop nets and follow. Still another poet, John Keats, sharing an intuition akin to Dante’s and Wallace Stevens’s, famously wrote this:

Beauty is truth, truth beauty—that is all ye know on earth, and all ye need to know.

In L’Inferno, Dante’s circles of hell are roughly organized in this fashion:

Early on in Dante’s poem, these broad categories are symbolized by three animals: a lean and hungry she-wolf (animal incontinence), a lion (violence), and a leopard (cunning). I think that this way of conceptually organizing the human moral life is exceptionally interesting. Do you have self control? Are you violent? Do you fake reality? These are the three great questions of ethics, and in Dante’s reckoning to do a fake-out on the trusting and vulnerable human heart is the very worst thing that you can do. It is a betrayal of love. And so in the center of hell, Satan, frozen in ice to his waist, is depicted by Dante as not just being two-faced, but as having three faces, and each of his mouths is gnawing on a famous betrayer. Two mouths are devoted to the betrayers of Caesar (Brutus and Cassius) and one mouth is devoted to Judas Iscariot, the betrayer of Jesus.

Thus in Dante’s moral scheme, the incontinent cause God the least displeasure, and the fraudulent the most. And so it is that Judas, the betrayer of Christ with a false kiss, is in the lowest circle of hell, and is gnawed upon in the very mouth of Satan. To betray the exchange of love, and send false signals to others, is the greatest of sins, for it ruptures the value of existence.

Who, after all, would want to live in a world without love, or in a world where those around you do not really love you? Dante’s Divine Comedy  is about Love and Truth, and their failure.

Dante and the Monstrous

Dante’s moral categories, when they fail en tout, and are accompanied by power over others, is what makes for monsters.

A monster, in other words, is something driven by its hungers, indifferent to the violence and harm it causes to others, and—if the monster has intelligence—is devoted to constructing multiple layers of deceit in the singular pursuit of its objects. The numerous monsters in Dante’s L’Inferno are like this: one monster, for example, has quite beautiful facial features, but bears beneath that face a monstrous body with a long tail. This monster guards the way into the circles of deceit.

Needless to say, much of our behavior as humans is monstrous, as when we indulge our impulses to cruelty, or fight in war, or engage in cut-throat social or financial advancement, and Dante’s monsters reflect human monstrosity.

Back in December of 2008, in Spiegel Online, there was a curious article about a real woman who has lived her life tormented by unusual recall. Her experience has striking resonances with the problems of the hell-bound in Dante’s poem:

Price can rattle off, without hesitation, what she saw and heard on almost any given date. She remembers many early childhood experiences and most of the days between the ages of 9 and 15. After that, there are virtually no gaps in her memory. “Starting on Feb. 5, 1980, I remember everything. That was a Tuesday.”

She can also date events that were reported in the media, provided she heard about them at the time. When and where did the Concorde crash? When was O.J. Simpson arrested? When did the second Gulf war begin? Price doesn’t even have to stop and think. She can effortlessly recite the dates, numbers and entire stories.

“People say to me: Oh, how fascinating, it must be a treat to have a perfect memory,” she says. Her lips twist into a thin smile. “But it’s also agonizing.”

In addition to good memories, every angry word, every mistake, every disappointment, every shock and every moment of pain goes unforgotten. Time heals no wounds for Price. “I don’t look back at the past with any distance. It’s more like experiencing everything over and over again, and those memories trigger exactly the same emotions in me. It’s like an endless, chaotic film that can completely overpower me. And there’s no stop button.”

Those in Dante’s L’Inferno are also haunted by memories. Their bad habits while on earth became a Thomistic habitus—a habitation—and now they dwell in the loop of their most characteristic memories for all eternity. In a short story, an incident in a life can take on great meaning, and stand in for the whole. Likewise in Dante’s L’Inferno. Choice moments representative of character become destiny. There are times when character is made (or broken), and Dante is a master at capturing those moments. One example in Dante’s text is the famous recounting of the story of Paulo and Francesca, blown about in life by the winds of their sexual desire, and now blown about with other adulterers in hell as if they were in a flock of birds. Their memory of their first kiss, and what it led to, now haunts them.

William Blake is one of the great Western artists who, along with the likes of Botticelli, Flaxman, and Dore, made an attempt at illustrating Dante’s Divine Comedy. And Blake was, like Dante, drawn to the idea of vision—of direct apprehension of the Divine. The imagination, from Blake’s perspective, is stultified by the intervention of intellectual reductionism. In Blake’s “Auguries of Innocence”, for example, he offers this aphoristic couplet:

A Riddle or the Cricket’s Cry

Is to Doubt a fit Reply.

And just a little further on down he writes:

He who Doubts from what he sees

Will ne’er Believe, do what you Please.

If the Sun & Moon should doubt,

Dante and Blake are sympatico. Dante, like Blake, made a commitment to close seeing, to the particular, to the individual—and these were accompanied by imaginative sympathy and vision.

Below is an image of Antigone functioning as the eyes for her blind father, Oedipus (based on a scene from Sophocles’s Oedipus at Colonus ). Why would anybody do this, letting one’s life be taken over by the needs of an old and poor blind man?

Oh yeah. It’s her father. And the very sight of him stirs her heart. She loves him. There are people or things you’ll go to the ends of the earth for. Beneath every moral act lurks such a visceral homage to some particular beauty or another, for every moralist is also an artist. The objects of love and art are contingent, compelling, and rarely utilitarian. Moral concern has always been idolatrous; it is energized by the making of idols and coming under the spell of them. This is true of all great love and art.

And so, just as Antigone felt love for her dead brother and father, Dante felt love for Beatrice, and so gave his heart over to her completely. And Dante was not alone. He also had someone to accompany him. It was Vergil who brought him down on a perilous route through hell. Vergil didn’t have to do that for Dante. But love compelled him. 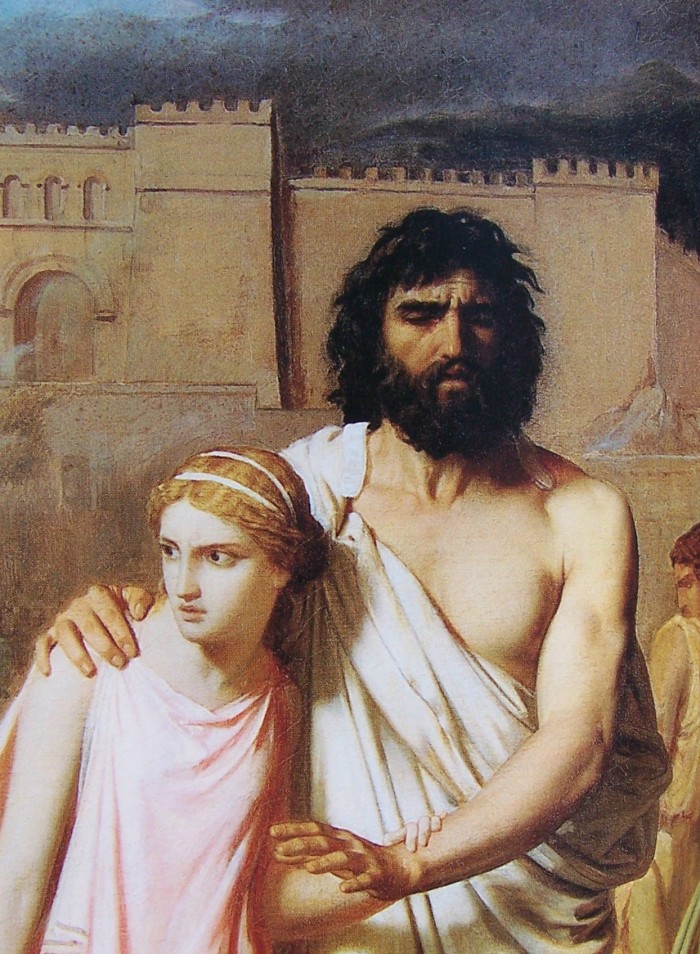 I teach writing and literature at Antelope Valley College in California.
View all posts by Santi Tafarella →
This entry was posted in Uncategorized and tagged beauty, Blake, dante, hell, Keats, life, love, poetry, Sophocles, The Divine Comedy, the inferno. Bookmark the permalink.

2 Responses to The Heart of Dante Alighieri