Christianism Watch: The Sign of the Fish Enlisted for War

A pretty darn ironic image: one of the Prince of Peace’s symbols enlisted for nationalist identification and war: 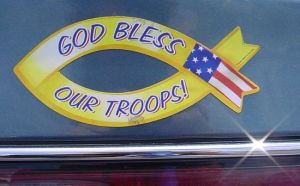 Of course, Constantine did something similar with the cross. But, if a contemporary Christian uses the sign of the fish in this way, is she saying that Christianity is a religion of peace or a religion of war?

I teach writing and literature at Antelope Valley College in California.
View all posts by Santi Tafarella →
This entry was posted in Uncategorized and tagged christianism, christianist, gandhi, God, Jesus, nonviolence, peace, religion, religion of peace, war. Bookmark the permalink.

5 Responses to Christianism Watch: The Sign of the Fish Enlisted for War