Yes, You Belong Here (Fake It Till You Become It with a Little Help from Yoga)

Posted on October 8, 2013 by Santi Tafarella

One thing that college is about is learning to assert yourself in writing and speech–to tell others what you think–and below is an exceptionally inspiring TED talk by Harvard professor Amy Cuddy for getting yourself in the bodily and mental space for doing this (if you tend to be a shy or self-doubting person):

My thought after watching this is that a person could readily put together a routine of morning yoga poses to subconsciously bolster confidence and assertiveness into the rest of one’s day (a new twist on “power yoga”).

Some of the poses I’m thinking of (which can be Googled) include:

I’m not sure what this tends to be called in yoga, but I would name Blake’s version below of Leonardo’s “Vitruvian Man” the “Blake Pose.” A thematic in Blake’s work is binding and loosing, and in this particular watercolor, Blake has placed his Vitruvian man before a volcano (or energy patterns suggestive of a volcano), making him what also might be called an unloosed and explosive Vesuvian man (for Mt. Vesuvius):

And this makes me think of some Emily Dickinson lines on the inward volcano, so maybe it’s better to call this yoga position, “Vesuvius Pose”:

Volcanoes be in Sicily

I judge from my Geography–

A Crater I may contemplate

But really, it deserves to be called “Leonardo’s Pose”: 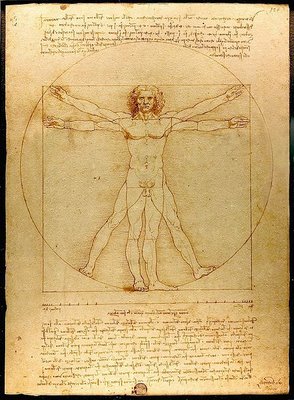 I teach writing and literature at Antelope Valley College in California.
View all posts by Santi Tafarella →
This entry was posted in Uncategorized and tagged analysis, confidence, critical thinking, fitness, life, self assertion, speaking, writing, yoga. Bookmark the permalink.

1 Response to Yes, You Belong Here (Fake It Till You Become It with a Little Help from Yoga)