Memo To Democrats: Thomas Jefferson Is Not The Confederate Flag 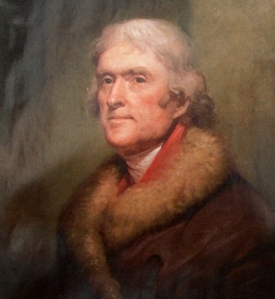 Thomas Jefferson is a Southerner, but he is not the Confederate Flag. I understand why the contemporary Democratic Party would backbench the two white males (Jackson and Jefferson) who founded the Democratic Party, but I still love Jefferson. His words sing. He was the Anglo-French Enlightenment come to America–and you wouldn’t have America absent the Anglo-French Enlightenment. In terms of early Americans, he towers over even Lincoln.

All honor to Jefferson–to the man who, in the concrete pressure of a struggle for national independence by a single people, had the coolness, forecast, and capacity to introduce into a merely revolutionary document, an abstract truth [all are created equal], applicable to all men [and women] and all times, and so to embalm it there, that to-day, and in all coming days, it shall be a rebuke and a stumbling-block to the very harbingers of re-appearing tyranny and oppression.

What we lose when we backbench Thomas Jefferson. The logic of Jefferson–his affirmation of science and skepticism; of the separation of church and state; of the right of assembly and free union organizing; of university learning; of equality; of democracy; of liberty; of progress; of freedom of speech; of the unhindered pursuit of individual happiness worked out by the individuals themselves, not dictated by the State–is the very logic of America, and (one might go on presuming and hoping) the Democratic Party.

But it’s also true that Jefferson never freed his slaves. And yet it’s also true that without his early theorizing and soaring vision of democracy and equality when the intellectual ground was still hard against these, there would be no Lincoln, no Elizabeth Cady Stanton (who echoed Jefferson in her 1845 Declaration of Rights and Sentiments with these words: “We hold these truths to be self-evident: that all men and women are created equal,…”), no Martin Luther King.

So the truth is complicated. It always is.

And while it’s true that Jefferson was a slave owner, it’s also true that there’s a straight line from this in Jefferson (“…whenever any Form of Government becomes destructive of these ends, it is the Right of the People to alter or to abolish it, and to institute new Government…,”) to this in Martin Luther King (“One has not only a legal but a moral responsibility to obey just laws. Conversely, one has a moral responsibility to disobey unjust laws”).

Complicate the messenger, don’t shoot him. It’s one thing to render more complicated the historical figures we otherwise admire, rounding them out as characters and treating them with nuance, and another to re-render them into flat and two-dimensional forms again, but just from another angle, enacting feigned offense at their sins, engaging in self-righteous and Puritanical purging, and indulging in iconoclasm.

Someone so emotionally and intellectually complex as Jefferson, who said, “I cannot live without books,” does not deserve this.

Thomas Jefferson shouldn’t get the John the Baptist treatment. It’s a huge error for the Democrats to hand Jefferson over to the Republican Party with his head, as it were, on a platter. Republicans will simply appropriate Jefferson to their own ends–and that quite gleefully. What a gift to lay in their laps!

We don’t need the Second Coming of Thomas Jefferson draped in the ludicrous ideological garb of Ted Cruz and the Tea Party. And the American flag and America’s founders don’t belong to the Republican Party either. How ironic Jefferson would have regarded such a turn on his fate: his abandonment by the very party he started.

Obama and Jefferson. President Obama certainly has never ceded Jefferson to the Republicans. In May of 2010, he quoted and commented on Jefferson–a slave owner, let me again emphasize–before a group of graduates at a historically black university (Howard), speaking the following words:

Years after he left office, decades after he penned the Declaration, Thomas Jefferson sat down, a few hours’ drive from here, in Monticello, to write a letter to a longtime legislator,…’If a nation expects to be ignorant and free,’ he [Jefferson] wrote, ‘it expects what never was and never will be.’ What Jefferson recognized, like the rest of that gifted generation, was that in the long run, their improbable experiment – America – wouldn’t work if its citizens were uninformed, if its citizens were apathetic, if its citizens checked out, and left democracy to those who didn’t have their best interests at heart. It could only work if each of us stayed informed and engaged; if we held our government accountable; if we fulfilled the obligations of citizenship.

Why did Obama deploy a quote from a slave owner at a historically black university? Because Obama is an intellectual–a Constitutional law professor–and was modeling nuance for the students graduating. The world is complicated and grayscale, rarely black and white. Competing goods are grappled with in intellectual life. The good and the bad are acknowledged and kept in conversation–not sublimated, not buried.

That’s the way the Democratic Party should deploy–rather than dispatch–its founder, Thomas Jefferson.

State by State, Democratic Party Is Erasing Ties to Jefferson and Jackson
Driven by a desire for racial and gender inclusion, activists are removing the names of Thomas Jefferson and Andrew Jackson from political dinners.
NYTIMES.COM|BY JONATHAN MARTIN