What’s It Feel Like For Your Existence To Precede Your Essence? Monochromatic And Abstract Expressionist Paintings Suggest An Answer

Posted on December 8, 2015 by Santi Tafarella 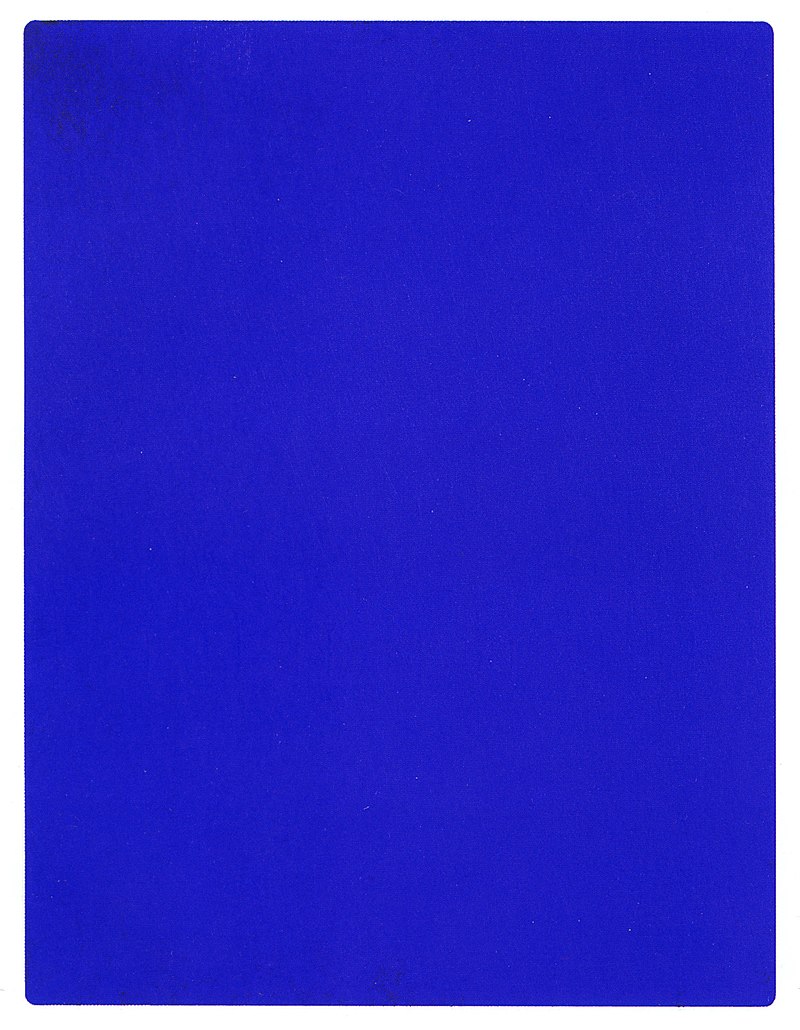 God’s death (and essentialism’s) represented in art. Above is a monochromatic artwork by the French artist, Yves Klein (1928-1962), but what do monochromatic and abstract expressionist paintings mean? Matthew Israel’s recent essay on Klein suggests an answer:

[W]hen [Yves] Klein started painting seriously in the late 1940s, he became increasingly interested in only the color of pictures he was making and was viewing. He explained: ‘In front of any painting, figurative or non-figurative I felt more and more that the lines and all their consequences, the contours, the forms, the perspectives, the compositions, became exactly like the bars on the window of a prison. Far away, amidst color, dwelt life and liberty.’

Secondly, Klein was deeply engaged with various philosophies and religious traditions, including Eastern philosophies, Zen Buddhism, Catholicism and Rosicrucianism, an international brotherhood which combines religious practices and beliefs from Hermeticism, Christian Gnosticism and Jewish mysticism and claims that it has secret wisdom that has been handed down to them since ancient times. Klein was particularly obsessed from a young age with The Rosicrucian Cosmo-Conception (1909) by Max Heindel. Heindel’s book has been described by the writer Thomas McEvilley as ‘a psychological alchemy which aspires to set spirit free from solid bodies and restore it to the Eden of unity.’

Israel’s observations recall Sartre’s famous phrase, “existence precedes essence,” which, in its affirmation of imaginative freedom preceding form, is in direct tension with the idea that essences, forms, and God’s will precede existence. Klein worked within this tension, and Jacob-wrestled with it. Monochrome and abstract expressionist paintings are existence preceding essence translated into art. And this is another way of talking about the death of God, for where God does not proscribe the essence of things in advance of our existence (“the penis is for the vagina, don’t use it in any other way,” etc.), then God is an irrelevant consideration in what we decide to do.

“Life and liberty” before the prison bars of proscription. Yves Klein’s vision is Promethean. Open “life and liberty” comes before the prison bars of proscription; before definition; before framing; before being caught in a matrix of obligation. Variation and imagination precede essence; possibility precedes essence; contingency precedes essence. The logically possible precedes essence (and matter). Variety, surprise, imagination. These are the spices of life–but they’re also unwieldy, viscous, The Blob.

The Blob in two dimensions is the monochromatic canvas. There’s something menacing about monochromatic and abstract expressionist paintings. Like something oozing out of a three dimensional box, the frame doesn’t really contain them. “They bleed on all sides.” The contemporary artist is accompanied by instability; the manic alternation between hope and fear. This instability is represented in aporias (impasses). Monochromatic and abstract expressionist paintings are impasses. Impasses in meaning. The one who resists all restrictions on form and possibility in advance; who would make the world anew; who would meet The Blob by taking full responsibility in the shaping of it, also faces emptiness; the haunting lack of point and meaning.

So where does one find eros for action if one is too ironic; if one can see that it’s all contingent; that all the meaning-making is on your shoulders? That’s what the two-dimensional Blob–the monochromatic painting–silently asks of the viewer, mocking sense.

Comedy, tragedy, and monochromatic painting. If the field of possibility is wholly open to refashioning; if there’s nothing that is “a given” in advance, then what are we to do–and why? And how do we cope with the Joker of contingency and chance, always at the ready to undo our projects? Won’t the Joker always be lurking in our deck of cards, not with bangles, but as a simple and unsettling monochromatic painting?

The Joker is the stuff of comedy, the monochromatic painting the stuff of tragedy. “Time and chance happeneth to all,” complains the writer of Ecclesiastes. “Life’s a piece of shit, when you look at it,” sings Monty Python.

A blob of shit. That’s comedy.

The unshaped piece of life-shit is The Blob. The Joker asks, “What will you do with it, Obi-Wan?”–and you reply, “How about making a monochromatic painting?”

To what end? The upending of the given and the death of God thus brings the contemporary Promethean artist and revolutionary of absolute freedom and openness to a place where progressive hope must necessarily alternate with the daunting questions, “To what end?” and “Won’t time and chance just undo my projects anyway?”

Despair, lack of point, and terror trails in the wake of the godless progressive–and is given tragic and haunting expression in inhuman monochromatic paintings.

But somebody (a woman? an atheist? an atheist woman?) deigns to take on the role of the pursuing bear of skepticism, asking, “Why should we go in your direction, and not some other–and what guarantees our progress?”

From doubt to apocalypse. Apocalypse Now. In a monochromatic painting, the expression of social hope, discovery, and adventure are present alongside nerviness, doubt, surprise, emptiness. It’s Jim Morrison’s blue bus (“Driver, where you taking us?”).

Thus Klein’s monochromatic paintings in “International Klein Blue” mock the confidence man, the imam, the preacher, the political demagogue. But they also mock the social hope of the atheist–and tell us why people, after their utopian dreams are thwarted–or feel unsatisfactory after being reached–revive medieval and fundamentalist certainties, seek out confidence men, and begin to long for apocalypse–or, if they are timid, the comic calm of Buddhist retreat.

I teach writing and literature at Antelope Valley College in California.
View all posts by Santi Tafarella →
This entry was posted in Uncategorized and tagged art, Catholicism, philosophy. Bookmark the permalink.