The Double Helix of Your Nightmares

Posted on September 25, 2016 by Santi Tafarella 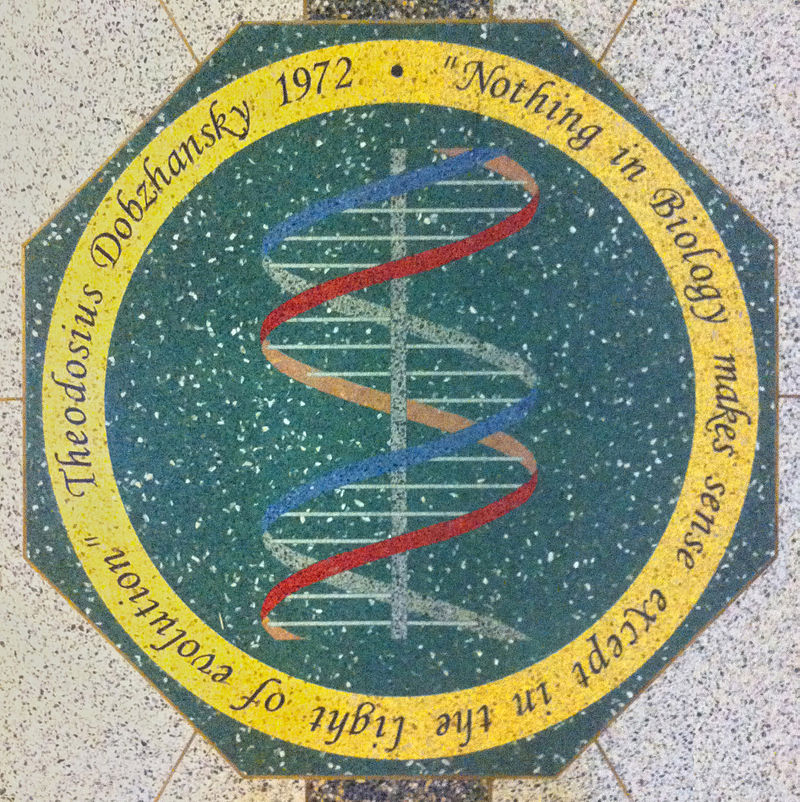 An interesting floor mosaic at the University of Notre Dame memorializing the evolutionary biologist who coined the familiar saying, “Nothing in biology makes sense except in the light of evolution.” The image of the double helix of DNA recalls the yin-yang symbol in Taoism, Jacob’s ladder, and the snake-entwined rod of Asclepius associated with medicine. And the background–perhaps representing stars–gives it the oddly impervious and silent aura of Stanley Kubrick’s monolith in 2001: A Space Odyssey.

So it has, in its mystery, an imposing and sublime Ozymandias quality: “Look on my Works, ye Mighty, and despair!” It’s as if the Dobzhansky quote that encircles it is incomplete without the menacing and impersonal image of that Double Helix before a background of stars. (And that Double Helix is in need of capitalizing.) Nothing in biology makes sense except in the light of evolution–and evolutionary time is inhuman and imperturbable. Its ways are not your ways. Its thoughts are not your thoughts. It is wholly other, governed by a logic that is wholly other.

You’ve got your work cut out for you, all ye who enter here. Evolutionary space-time’s pervasiveness and fecundity “make up a heaven of our misery” (Blake); they are the marriage of heaven and hell, unfathomable and inescapable, except in death. Except in death. The double helix that can be named is not this eternal Double Helix; this yin-yang snake tangling and disentangling in endless rounds of trial and error, hit and miss, forever and ever, worlds without end. The Double Helix of your nightmares.