I’ve decided to attempt the first draft of a college-level textbook, writing it directly into my blog, bit by bit. Feedback and recommendations in the thread comments are welcome, either encouraging or critical. The first chapter is a mini-course in critical thinking for writers; the second chapter is a mini-course in rhetoric for writers. This post starts chapter one. To have a look at other parts of chapter one–or of chapter two–click here.

Concept 1.1. Good rhetoric is in need of critical thinking. In classical rhetoric—the art of persuasion—the central appeal is not to audience emotions (pathos), but to reason (logos). Reason might include appeals to such topics (topoi) as those identified by the ancient philosopher Aristotle (384-322 BCE): logic, evidence, comparison, definition, causation, and so on. In writing an essay, for instance, you can have everything going for you rhetorically—an interesting subject, thesis, and genre; an engaging title and opening paragraph; a tone and style that matches your audience’s sensibilities; a thoughtful arrangement of paragraphs—but if you don’t make rational appeals, and don’t reason well when you do, your ultimate success will be in doubt. Like poor grammar, poor reasoning clangs to the ear, leading your reader to say no to your statements or to murmur reluctantly, That doesn’t sound right. It has been said that Benjamin Disraeli once cast shade on another parliamentarian by saying, “I was with you, sir, till I heard your argument!” It’s not always enough to appeal to an audience’s existing desires and prejudices; sometimes you’ve got to support your claims with good, rational reasons. And so it is that argumentation entails critical thinking.

Critical thinking is the attempt to arrive as nearly and objectively as possible at the truth of a matter.

In 1946, George Orwell (1903-1950), the author of the novel 1984, wrote an essay for London’s Tribune titled, “In Front of Your Nose,” in which he laid out a theory for why critical thinking is so hard: “In general, one is only right when either wish or fear coincides with reality.” Notice that Orwell is making a funny, ironic point, and observe that it rests on a powerful syllogism (two premises accompanied by a conclusion): (1) our deepest hopes and fears lead our reason; (2) they rarely match reality; therefore, (3) our conclusions rarely match reality. In the same essay, Orwell also writes the following: “To see what is in front of one’s nose needs a constant struggle.” In these two sentences, Orwell provocatively suggests that the difficult part of critical thinking is not the act of concentrated attention to a problem, but of reducing subjectivity and increasing objectivity. The struggle is to never look away; to face the truth without, Oedipus-like, plucking out one’s eyes.

Writing 1.1.1. In a paragraph or two, reflect on how hope and fear interact with one’s reason. Why do you suppose, as Orwell suggests, our hopes and fears so rarely sync up with the way things actually are? 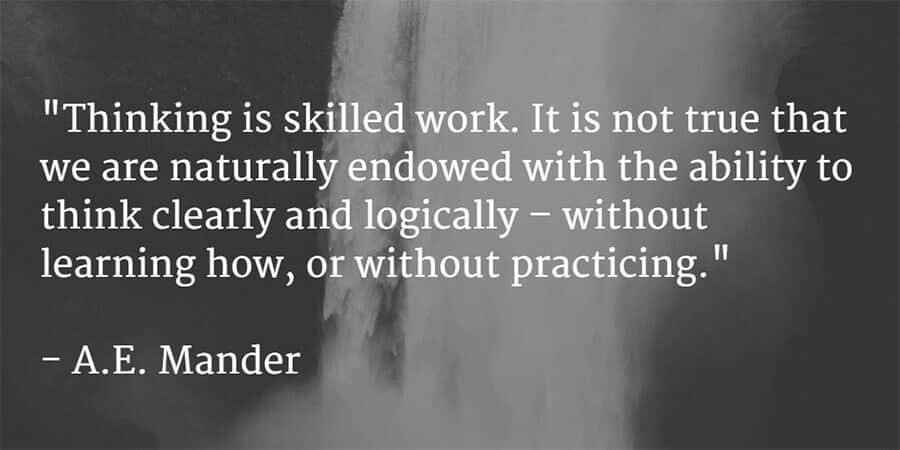