A Mini-Course In Critical Thinking For Writers. Concept 1.8: Scientific Method

Posted on October 6, 2018 by Santi Tafarella

I thought I would attempt the first draft of a college-level textbook, writing it directly into my blog, bit by bit. Feedback and recommendations in the thread comments are welcome, either encouraging or critical. The first chapter would be a mini-course in critical thinking for writers. To have a look at Concepts 1.1 – 1.7, click here.

Scientific method. If we’re not engaging in self-deception, trying to ad hoc our way across the bridge from logical possibility to the actual truth of a matter, we see that we have a variety of genuinely powerful, seemingly objective tools ready to hand to help us reach beliefs that would appear to be rationally justified (warranted):

the three rules of thought

brings questions to the cosmos

generates competing theses or theories that are capable of falsification

Survival of the fittest theories. The scientific method is a sorting process for theses; it’s about discovering theses survivors after an ordeal of testing, whether in or out of the lab. It’s about the survival, as it were, of the fittest models or maps for navigating reality. These fittest models are discovered in the way that the best gladiators in the ancient Roman arenas were discovered: by contrivances dreamed up for trial or testing. But in the case of science, these trials are not dreamed up by emperors, but by scientists; scientists deploying scientific method.

Criteria of adequacy.  A theory that cannot be falsified, or that is phrased in such a way that it’s impervious to new data, reality testing, or competition from competing theories is not a scientific theory. Testing is a must. But aside from a theory being testable, by what general criteria is it to be judged in relation to other theories? First, if it’s an interesting theory, scientists agree that it is fruitful (it makes predictions that pan out; it’s not readily surprised by new data; it’s not constantly requiring the addition of ad hoc premises to save it). Second, it has scope (it explains a lot of things, not just, say, one or two things). Third, it slots into our already well-established background knowledge (a theory of biology shouldn’t contradict a well-established theory of physics). Fourth, it’s simple (it doesn’t multiply premises beyond necessity; it incorporates new data in a natural, as opposed to a strained, way). Alongside testing, these can be posed as straightforward questions brought to a theory:

Does it have scope?

Does it accord with our well-established background knowledge?

Together, these concerns are sometimes referred to by scientists as the criteria of adequacy.

Abduction: reasoning to the best hypothesis. But it’s not enough to be adequate. Even if a theory passes through these five questions with flying colors, it still has to survive the judgment of the sixth and final criterion: Is it the best theory? It can’t be merely a good, interesting, or adequate theory. It needs to be the very best on offer. Isaac Newton’s theory of gravity works, but Albert Einstein’s has greater scope, and so works better. (Sorry, Isaac.) And perhaps someday a better theory of gravity will arrive, overthrowing Einstein’s. Scientific knowledge is always provisional. Metaphorically, Galileo’s telescope never comes down.

Fact-value entanglement. In one sense, when working with scientific method, we’re not dealing with values, but facts. Noticing, for instance, that evolution frequently entails competition (a fact) doesn’t tell you whether you should be competitive or cooperative with someone at work (a value). No is demands an ought. It was the philosopher and historian David Hume (1711-1776) who first made this important is-ought distinction. But while it is often crucial to maintain this is-ought distinction in reasoning (noticing when one is pointing to a fact—an is—and a value—an ought)—it should also be observed that is and ought are difficult, arguably even impossible, to wholly disentangle in practice. Look again at the six criteria scientists broadly agree should be deployed to reach the truth of matters, and to lock down things we can take to be facts. A good theory:

(6) should be the best theory on offer

But notice all the shoulds in this list. In other words, our criteria for arriving at a thing we take to be a fact are laden with value statements (facts should be this, facts should be that, etc.). If, for example, we value the criteria of adequacy, then evolution is vastly more reasonable than alien intervention in explaining the variety of species on our planet. But why should reality and the truth be a matter so readily testable? Why do we value fruitfulness, scope, and coherence? Why should the things we take to be facts be simple, possessing an economy of premises, rather than elaborate and complex, possessing a multiplication of premises? And isn’t it obvious that there are many things that we take to be true that fail to meet one or more of the criteria of adequacy? Thus, even if we are convinced that we have adopted the best values and models for generally getting at the truth of matters, we cannot wholly disentangle the processes we have chosen to get at the facts from what we take to be the facts themselves. The criteria we value for bringing us to high confidence that we’ve reached the truth on a matter cannot, like a ladder, be kicked to the ground after reaching the roof. If we kick away the ladder, we lose our basis for certainty as to where we actually are. And yet our ladder–which includes the rungs of our value-laden criteria for reaching the truth–really only gives us the ability, if we are being honest, to proceed with caution about our statements of fact. Our values and models condition and infect our facts. Our human condition is such that we never have a wholly objective, value-free, and unmediated relation to reality, truth, and the good.

Writing 1.8.1. Pretend the internet doesn’t exist. Now, like Oedipus addressing the Sphinx, bring a question to the cosmos and puzzle over how one might tease an answer from it using scientific methods. Write out the process you would use to discover the truth of the matter. Think about the level on which you might be satisfied to get an answer. For example, if you asked why it is that old buses form such visible evidence of rust, at what level would you regard the question as answered (at just the level of being left out in the rain, or an answer from chemistry, etc.)? Perhaps speculate on tentative competing answers to the question as if you were beginning a process of abduction. In any case, if you really wanted an answer to a question concerning the cosmos, how would you go about getting it–absent a Google search? (Example questions: Do birch and eucalyptus trees shed their leaves at the same time of year, and if not, why? Why is glamour a magnate to some people, but not others? Why did Neanderthals become extinct?)

Writing 1.8.2. Use the criteria of adequacy to evaluate a claim. Is it testable? Fruitful? Does it have scope? Is it conservative (does it accord with what we’re reasonably confident we already know)? Is it simple? Then add to the five criteria of adequacy one more question; the abductive question: Is this the best thesis on offer? Write in your journal your observations and conclusions surrounding the claim.

Writing 1.8.3. Reflect on an is-ought distinction, noticed by yourself or another. Wrestle in in your journal with the difficulties of the distinction. It may be true that no is demands an ought, but is it wholly true that no “is” should ever inform our “oughts”?

Writing 1.8.4. For your journal: Can we ever wholly disentangle what we take to be facts from our values? Can we have an unmediated encounter with truth? 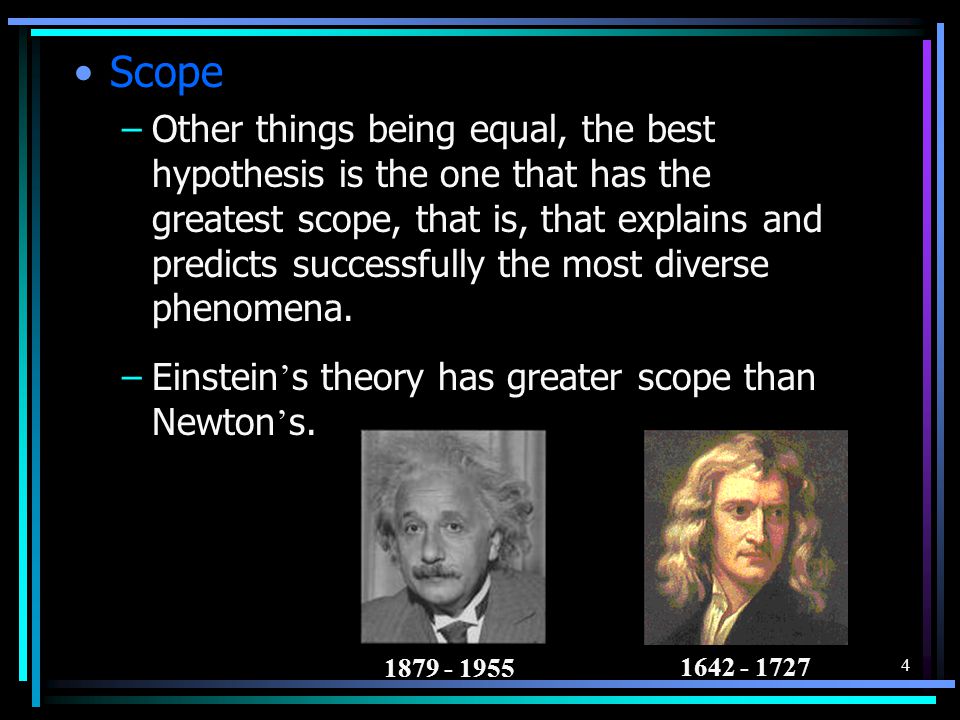 1 Response to A Mini-Course In Critical Thinking For Writers. Concept 1.8: Scientific Method