People who try to suggest that UFOs are in some way responsible, over the millenia, for the direction of human cultural and religious evolution, sometimes appeal to curious images such as this one as potential evidence:

The above painting is titled “The Baptism of Christ.” It was created by the Dutch painter Aert De Gelder in 1710 and belongs to the Fitzwilliam Museum collection, Cambridge, UK. Modern viewers cannot help but be struck, especially in a low resolution reproduction (as above), by the apparent presence of a UFO in the painting. But if you look closely, it is evident that the circle in the sky is actually a clearing for the artist’s portrayal of the dove of the Holy Spirit. It is thus the dove, and not an alien spacecraft, that is the source of divine light in the painting.

Now it could be argued (I suppose) that the artist had a UFO encounter and incorporated his experience into the painting. But to echo and paraphrase Freud, sometimes a cigar is just a cigar, and sometimes a circle in the sky is just a circle in the sky—and not a spacecraft from another world. Still, I think that there is something telling here. UFO sightings, with their spectral qualities and mysterious beams of light that sometimes cast themselves down upon common mortals, do tap into some very deep parts of the human religious psyche. It’s hardly surprising that UFO sightings should be experienced in ways similar to religious epiphanies, and that religious art should have curious affinities with UFO sightings and abductions.

Here, for example, is a depiction of St. Augustine (from the Altarpiece of the Church Fathers, Munich, 1483) having a rather dramatic alien encounter of the Christian variety. The painting, of course, doesn’t mean that the artist secretly had an alien encounter and was depicting that alien as the devil in his painting. Rather, the human imagination is already chock full of alien projections. Long before there were space aliens, there was the alien and the alienist (one who doctors the ill mind).

And below is Christ depicted as an alienist. It comes from the School of Milan and is in carved ivory (tenth century). It depicts Jesus driving an unclean spirit from a man, probably the Gadarene demoniac. (And no, that’s not a UFO hovering alongside Christ’s left ear.) 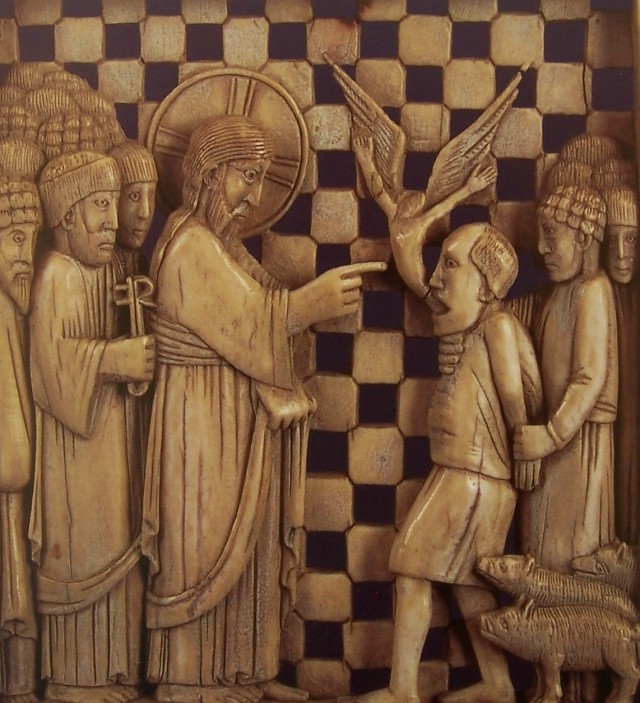 I teach writing and literature at Antelope Valley College in California.
View all posts by Santi Tafarella →
This entry was posted in Uncategorized and tagged alienist, aliens, art, Christianity, demons, Jesus, jesus and ufos, psychology, religion, skepticism. Bookmark the permalink.